WHEN THE WORLD IS SICK, CAN SOMEONE BE WELL?

WHEN THE WORLD IS SICK, CAN SOMEONE BE WELL?

The performance exhibition ‘WHEN THE WORLD IS SICK, CAN SOMEONE BE WELL?’ is a collection of works from 6 international artists. At the end of this troubling year, together with the artists, Jianan Qu forms a rather rare platform for performance works, that for a moment serves as a safe place.

The setting of the exhibition deals with the current situation where live performance is to some degrees being disabled. At this very moment, how do pandemic politics affect the artists and their artistic expression? How can performative practice be connected to a social dimension despite social limitations?

Through the online platform and with the billboards as an intervention in the public space, the gathered artists talk about the now and the future. What is in their mind and what isn´t. Asking each other how things are going, they are at the same time waiting for what is to come.

In Chinese expression, ‘Spring Autumn’ is another word for history. The meaning of these two seasons suggests a change, or a transition - into the known as well as the unknown.

The title ‘WHEN THE WORLD IS SICK, CAN SOMEONE BE WELL?’ is from the lyrics of the Canadian band, A Silver Mount Zion.

Istvan Antal is a sculpture artist, currently lives and works in Vienna.
The topic of intra-European migration particularly interests him due to his first hand experience of frequent movement and forgeign experience. Though exploring the topic of migration, his interest deviated towards education and play, with an interest in how transmission of culture, teaching and upbringing can manifest in this `play´ act. The installations he has built in response to this idea of `play´ are objects of use, interactive sculptures, which formally and conceptually meet at the intersection of fine and applied arts.

Ladder (Interactive installation, 2020)
The ladder installation is part of an on-going series of public sculptures. By utilizing everyday objects in public spaces, the artist observs their functional, metaphorical and aesthetic elements to re-contextualize them and give new meaning to their form. This installation is a ladder pointing to the sky, which stands on two springs and sits, unsupported, on top of a mound. The viewer is invited to climb the ladder, which on ascension becomes less stable the higher they climb.
Camera: Christian Schwab

Kuba Borkowicz - performer, visual artist, and curator, working between Berlin and Poznan. He is a member of the Mineralwasser Kollektiv, a Berlin-based group of international performance artists. In his artistic practice, Kuba focuses on meditative qualities of the creative process and their potentiality to create a shared experience.

First Tattoo (performance, since 2016)
First Tattoo is an attempt to create a platform for artistic exchange using the surface of the skin. Invited artists are asked to make their first tattoo on Kuba Borkowicz’s body, in a performative context balancing between personal tattooing workshops and an intimate ritual. This initial exchange often leads to another expressions of creative collaboration.

Sam Bunn is an artist and independent scholar working between installation, performance and film to explore a missing strand of popular storytelling, the eutopian narrative. Focused on trying to imagine a more shared socio-political global norm, his practice is based on an experimental approach to making and regularly involves working with others.

utopia with an E - delineating the missing film genre.
AN OPTIMISTIC VIDEO ESSAY FOR MAKERS (video essay, 2020)
“utopia with an E” is a 15 minute video essay, based on an article that artist Sam Bunn had published by the Open Library of Humanities in 2019. In a brief, playful manner, Bunn attempts to share his academic research into what he considers to be a vital, yet almost entirely empty part of the filmscape: Utopia / Eutopia.

Sara Lanner is a choreographer, dancer and performance artist. Her work deals with topics of the body in relation to its context and the self as social choreography and sculpture. Her performances take place on stages, in galleries or in interdisciplinary and public spaces.

Smirna Kulenović is a transdisciplinary performer, activist and media artist, born in Sarajevo/Bosnia, currently based in Linz. In her work, she examines the performative relationship between physical and mental endurance as a survival strategy and resistance to the absurdities and limitations of the socio-political mechanisms in contemporary Europe and the Balkans. She deploys aesthetic modes of action that are situated as a serious practice of joking, a bizarre unification of the difficulties of being a political subject - in anarchist orientations - and humor.

2020 (performance, 2020)
During the performance of ‘2020’, the artist tries to maintain balance in Cobra Yoga Pose while getting “2020” tattooed (hand-poke) on her lower back.
Photo: Daniel Bierdümpfl

Jung An Tagen is one of many pseudonyms of the musician and artist Stefan Juster, who was early on part of the post-noise tape scene. In 2016 he started to release on the influential Editions Mego, since 2020 Stefan also runs etat.xyz, a label with a focus on dissociative, psychoacoustic, computer music. His LPs combine influences from early Detroit techno, electroacoustic and extreme computer music.

Jianan Qu is a Vienna based Chinese interdisciplinary artist, pedagog and independent curator. His works are mostly related to performance, by developing an interactive practice, discovering the potential performative aspects in arts, as well as in the art space. Jianan Qu lectures at Anton Bruckner Private University Linz. He was a visiting professor at the University of Applied Arts Vienna and a visiting lecturer at Tsinghua University Beijing amongst many others. 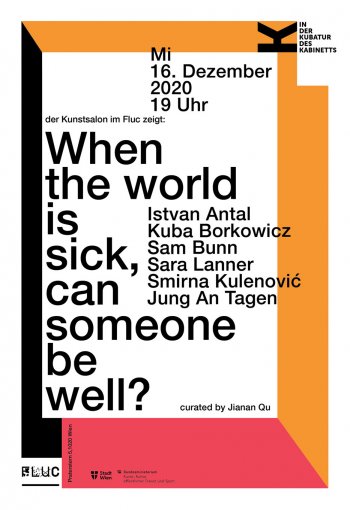